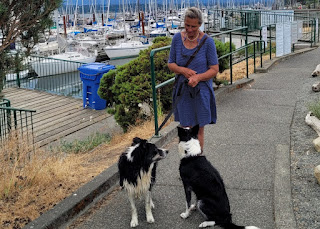 You know how young children can announce after playing with a random kid fot five minutes at the playground that they have a "new friend"?

Today my husband and I had a discussion about having a walk somewhere.  We settled on going to the pier/marina in Comox.  While today was sunny and still relatively hot  it was also hazy with the miasma from the wildfires in the Okanagan and elsewhere.  The smoke and mackerel clouds took.the edge off the sun's persistent burning pounding of the past several days.

So, after wedging our car into the last of the parking spaces near the kiddie playground, we headed over to the pier.

As we walked alongside the chain link fence bordering the road that eventually forms a 4-way stop, we see a lone dog walking at a brisk pace towards us.  She had a sweet Border Collie face, but registered no interest in our concerned inquiries as to where her person  was etc.  Indeed, she trotted purposefully through the small opening between us and continued on her way at the same steady pace.

We watched her until she turned a corner.  We suggested possibilities: perhaps she was meeting her person at the dog park? Maybe she lived around here and was headed home?

We continued on to the end of the fence and were just on our way to the entry to the pier when a woman with another black and white dog stepped out in front of us and the marina office and did a shrill dog whistle, the sort I had never been able to accomplish even with much practice and up-close tutelage as a kid.

"Are you looking for your dog?" my husband asked.

Smiling and friendly, she replied, that yes, she was.  Ed told her about the dog we had seen moments before and how she had bowled through the space between us, seemingly on a mission.

"That would be Meg... headed over to the playground. She slipped out when I turned my back.  She goes looking for a kid to throw a ball for her."  Eye roll.

We said goodbye and went off in opposite directions.

On our way back from the pier we again ran into our smiling new friend and her two dogs.  We told her our names and learned that she was  Becca, formerly an art history teacher.

Becca introduced Meg to us.  When Becca said  "Meg, these people want to meet you, look up," she did, indeed, look up, perked her ears and wagged her tail.

Meg was wet, had had a swim.  Becca had found an old child's Croc and thrown it for Meg to retrieve.  Meg loves to go to the playground where there is bound to at least one child who loves throwing a ball for her as much as she loves chasing it and bringing it back, over and over and over.  She is attracted to kids' energy in the way moths are attracted to patio lights.

She told us that she had sailed her 50-foot boat as far as Alert at the North tip of the Island and was on her way back to Bowen Island where she lives.

She had just seen an eagle up close, sitting on the fence rail, and was digesting that experience.

She also bubbled over with some other stories of synchronicity-- but her story to tell, not ours.

Ed and I were charmed by the lovely lady and her dogs and I found this article about her when I got home.