The Next Step with the Wormy Culture: Make the Bed & Spritz 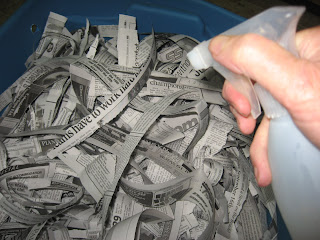 This was probably the easiest part of the task... finding enough newspapers to strip up and put into the bin as 'bedding' for the wee wormies.  I filled the bin to the top and then spritzed with plain water just to slight dampness, just mixing a bit as one would do with a big old salad.  Then I went out into the yard (in the rain, I might add) and dug around in the compost (this time I wore gloves lol) for the cantaloupe that was buried there three days ago, like a cup, to attract the worms.  And there it was, and there they were, I think.... I was nervous about exposing them to light because I hear that they 'paralyze' in light, and so I quickly transferred them in the upended cantaloupe 'cup' to a little icecream pail with a lid and rushed them into the house.  Sort of like the story I heard from a pediatrician I worked with years ago... she had to go along on a plane trip to pick up an donor organ for a child and quickly, ever so quickly, pack it in ice and bring it right back to wherever it was being received.  I know the analogy is a little weak, but... well, you know, I was nervous.  I stuck the cantaloupe up in the right corner and placed bedding over it.  I note that there are a lot of 'wood bugs' and some fruit flies (or whatever) that also made the journey.  Ew.  How do I get rid of them? Stay tuned.
Our Food Matters-- Join a Social Network to Match Your Own Social Ethics and Wisdom