The Canada Food Guide was developed during World War II when there were disruptions to the general lifestyle and economy and it was felt that there needed to be some sort of "rules list" to ensure for a healthy populace.  The Depression that followed World War I with crop failures and stock market plunges and job scarcity no doubt had some input into the formation of the 1942 Food Rules.

If you grew up, like I did, in the Prairies in the 50s and 60s, you might not be unfamiliar with the following sort of plate (meatloaf=protein, potatoes and corn=vegetables-- there was likely a slice or two of bread and butter on a side plate, and maybe some canned peas or such, and likely a dessert that contained the necessary dairy and maybe some raisins to represent fruit.  If you were a kid, a glass of milk was generally served at the same meal if your parents were intent on "building your bones".): 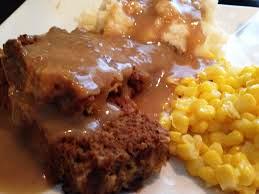 Perhaps you see the same plate on your table today.  I am not criticizing (here).  This was pretty much the dictate of the 1942 Food Rules.  If you ate a "hearty" breakfast at home once a week, it likely looked a little like the following: 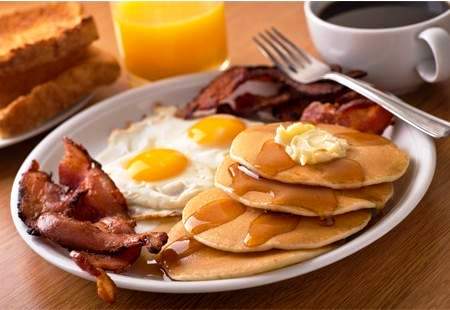 And again, maybe this is standard weekly fare for you to this day.  Perhaps you are new to Canada and this represents the wonderful benefits of living in this abundantly food-ed country.  I must admit that this picture does make me salivate even though I have not eaten bacon and eggs for quite a while and probably will not again.  Note the glass of orange juice-- in the old Food Rules, juice was a legit substitute for a piece of fruit.  No more.  Nor is milk considered an appropriate beverage in meeting the new guidelines.  Plain old WATER is the suggested beverage in the latest Health Guide.

THE MEAT CULTURE
I will assume you have not been living under a log and know all the arguments for eating animal products-- meat, eggs, poultry, fish, dairy, and other animal excretions.

The eating of animal products seems pretty well embedded as one of the bonuses of being a dominant species on this planet.  We have placed ourselves at the "top of the Food Chain" and have piles of rationals and explanations for the eating of other species and the drinking of their milks.

I am pretty sure that there are large components of every language and ethnic group on the planet with a vociferous plan for maintaining their dominant, traditional, social and cultural ties to eating meat.

On the other hand, there is also a growing groundswell of agreement that factory farming, factory fishing, ocean pollution, massive cuts of rain forests for ranching, climate change, and a prodigious ongoing appetite for animal foods is destroying not only the other species on Earth, but is not doing us any health or social benefits, either, but is ,indeed, also contributing to individual and collective human poor health and vitality.  Some of the world's longest-living people eat no or little meat or animal products.  (See the The Blue Zones, Second Edition: 9 Lessons for Living Longer From the People Who've Lived the Longest

What about the Hunter-Gatherer argument, that global indigenous peoples have lived by hunting animals and gathering wild herbs and fruits, and that this lifestyle has afforded both healthfulness and natural balance?  Apart from the vegan argument for the same respect for not eating all/any sentient beings (living creatures who experience sensation and emotion), there is a bit of a skew in seeing that there are in fact enough wild "food" animals for all the people of the world to hunt and eat without the further depleting of entire species, as already happens with the more global open season on sea animals, for example.  Where is the balance?  Read about this indigenous scholar's decision to go vegan and the cultural factors that figured into her choice.

So, yes, meat-eating is heavily upheld by many as a positive, traditional, and therefore culturally inviolate way of life.  On the other hand, like the indigenous scholar above, many peoples with a strong culture and tradition around eating animal products have 'come out' and are embracing a plant-strong lifestyle.  I think the Canadian Food Guide 2019 carries a proactive vision that will be echoed and enlarged by more and more Canadians and global citizens as the benefits of a vegan lifestyle and diet are recognized.  I commit to providing delicious, healthy recipes here that reflect the intent of the Food Guide.  If you are interested in following me on Facebook, I post recipes there about three times a week at Organic Granny Veggie Recipes group.  I like to include a lot of recipes that are similar to the 'meaty' comfort recipes people miss or look for when they transition into a plant strong diet.  I also like to include a Monday Mock Meat recipe, a Tuesday Tofu recipe, and a Wednesday Wellness recipe, all plant-strong, and mostly low fat and often gluten-free.  JOIN US!

THE VEGGIE COUNTER-CULTURE
Vegans are a counter-culture in Canada, and likely in most world ethnic cultures today.  As a long-time Adventist Christian, I have had the opportunity to mix with vegetarians and vegans on a regular weekly basis over the past 25 years, and since my husband was an Adventist prior to that, we have been vegetarian-flexitarian-vegan for probably about 45+ years.  By flexitarian I mean to say that we have gone back to meat-eating at various times in our past, but have resolutely returned to a plant-strong diet, and now I believe that we are fixed there because we definitely enjoy vegan food and find the concept of killing and eating animals to be very troubling in a country that is rife with other forms of protein (the main reason that meat-eaters have claimed that they eat meat is because of the protein factor, in my experience).  BUT-- I am still regularly directly and subtly challenged by non-vegans about the inadequacy of my diet and other things, such as how "politically-correct" veganism is, and how they can never see themselves giving up meat for various reasons.  The 2019 Food Guide might appear to be a Vegan cultural switchover to meat-eaters, but so far, the counter-culture is still Vegan.

If you are curious about how/why some meat eaters made the transition, here are some "testimonies" on video by some of prominent vegan physicians, and some recipe books by members of  various ethnic/national/religious groups who recognize the delights of a vegan diet (or, at least, of a vegan recipe that is patterned on their traditional food treats).  Enjoy!

Dr. Michael Greger talks about his daily public service (videos and blogs at NutritionFacts.org) dedicated to his Grandmother who inspired him to become vegan and a lifestyle physician.
Dr. Cauldwell Esselstyn, Jr. talks about his work with patients with breast cancer and how he became tired of 'losing' patients regardless of what 'medical interventions' were introduced... the reason he is so passionate about medicine today is because of the science-based evidence that food (plant-strong) can reverse disease.
From a Physicians' Committee for Responsible Medicine (PCRM) conference:What Dr. Neal Barnard and other vegan doctors eat during the day!