July 09, 2019
Okay, as a big promoter of eating organic foods, I admit that I generally share recipes for whole food plant-based dishes that contain organic fruits and vegetables-- if you have been here before, you know the recipes: vegan soups, stews, 'cheeses', sauces, casseroles, breakfast foods, etc.


But what could I do when I received an email asking if I would consider reviewing some CHOCOLATE BARS?? (or more accurately, 99% organic, vegan, wild-sourced, organic, botanic cacao bars with No GMOs, and studded with healthy botanicals (herbs, spices, tea, mushrooms, essential oils??)).

They are also NOT ROASTED which means... tah dah.... RAW VEGAN!!  Oh, and handmade (I guess that means that they DO NOT have the chockies going down the conveyor belts like this classic clip we remember from an I Love Lucy episode:

And then because I live in Canada, it took several weeks to pony-express the package here via CUSTOMS from Santa Cruz, California.   Just when I thought they had either forgotten to put the package in the mail, that it was a big old scam to get my banking ID or whatever, or maybe there there was a crisis of some sort with our countries' trade relations.... they arrived!!

3 small, flat packages wrapped well so as not to crush their precious cargo.  Here are my reviews of each of the 3: 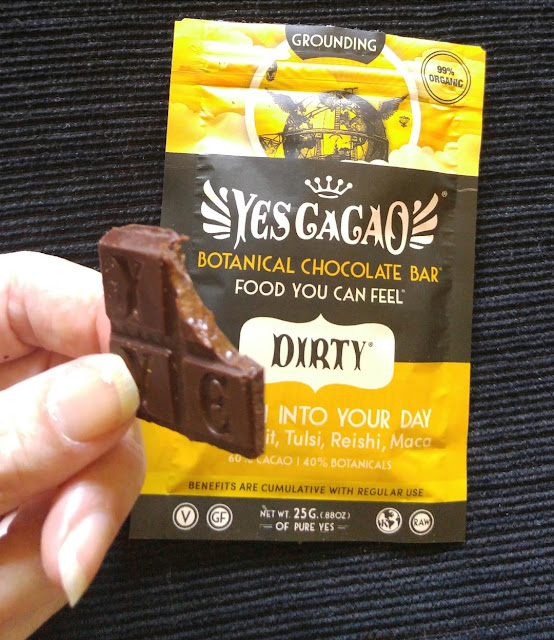 My husband and I had just come back from a dinner at my fave vegan eatery in our small city.  We had ordered their spinach burrito, forgetting how massive it is.  Delicious veggie fare with rice and beans and corn and a veggie sour cream topping and salad.

We were still feeling quite full when we arrived home and found the package with the chocolate in it.  However, chocolate seemed like a very nice little dessert.  We each had a couple of the small squares.  They were silky smooth, dark cacao-- the difference from dark chocolate is that cacao doesn't have the sort of biting bitter edge that dark chocolate does, which I appreciate.  I could sense a tingle of Peppermint-- and when I read the ingredients, I did, in fact find organic Peppermint Oil as the last ingredient listed, so presumably, the smallest portion of the  botanical ingredients was the Peppermint Oil.  I liked the hint and do know from long-time use of essential oils, that Peppermint oil is quite assertive, even when minuscule amounts are used (for example, just dipping the tip of a toothpick into Peppermint oil and then into a cup of hot water is enough oil to flavour a cup of peppermint tea.)

Besides just the teeny hint of Peppermint Oil there was nothing that shouted "this chocolate is full of healthy herbs, reishi mushroom, and maca".  The flavour was pleasant and we also  noted that we felt a warming sensation when we ate it that was also pleasant.

I appreciate the cute little zip-lock feature on the packages so that one can keep the remnants of chocolate 'fresh' in a cool place, as advised on the packaging.

There was certainly no 'medicinal' taste such as one finds in certain chocolate-flavoured diet 'treats' that are claimed to be healthy because of various 'supplement' additives.  I am pretty impressed with the flavour and the mouth appeal of the "Dirty" bar.  It also seemed that just a couple of squares were sufficient, and that I wasn't hit with the sort of 'crave' response that I often have when eating regular chocolate.

Here are the ingredients for the "Dirty" bar:  (some of them I still have to google, such as Shilajit and Gynostemma.) 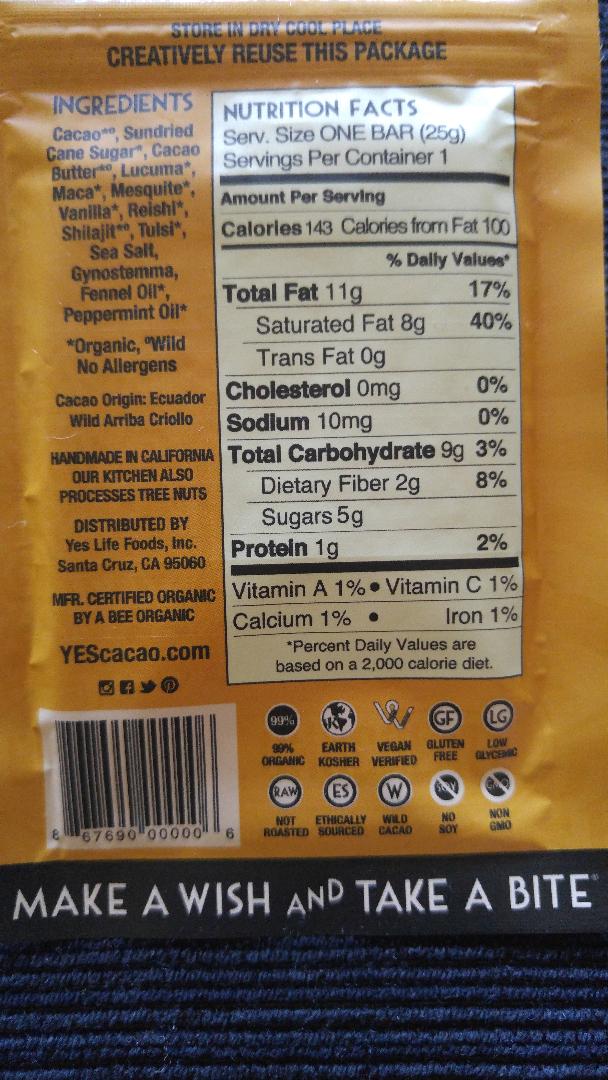 Very tasty, and all the ethical and health features impress the heck out of me, as I said at the beginning.  The price is a little steep at $5 USD (about $6.71 CAD) but good organic, fairtrade chocolate runs to that these days in the local stores, and doesn't have half the 'benefits' that these bars would seem to have.  As well, these 'botanical' bars are being marketed in much the way that supplements are, and there is a line on the front of the package that reads: "Benefits are cumulative with regular use."  While I am not a big fan of 'supplements', preferring whole food, plant-based eating, I might still buy into the notion that a square of this chocolate every day  is worth a trial (in the case of the 'Dirty; bar, with the goal of "grounding." 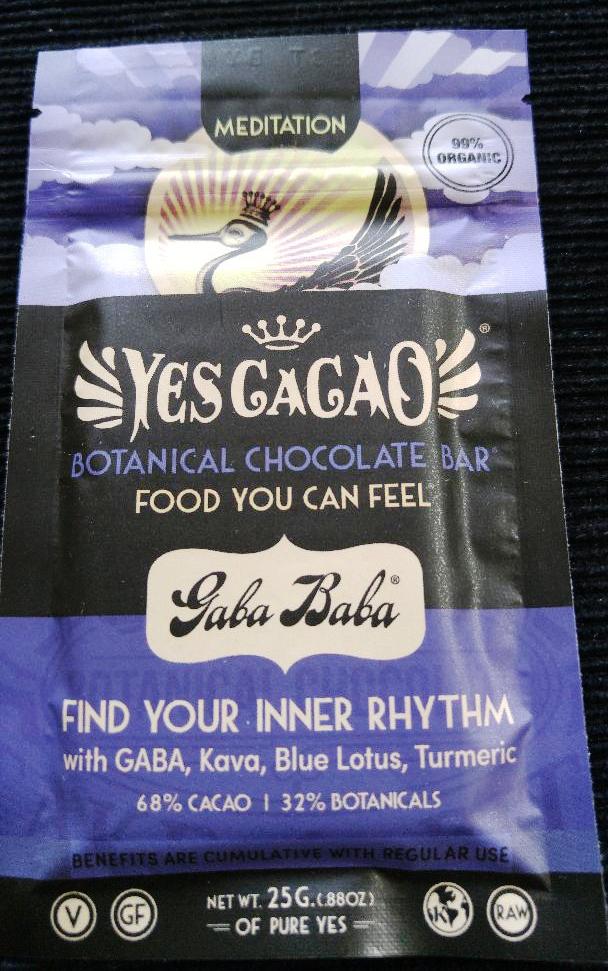 Cutesy little name for this bar, capitalizing on GABA, or gamma-Aminobutyric acid.  Astonishingly, GABA is an "inhibiting neurotransmitter" and helps in regulating excitability in mammal (human) nervous systems.  GABA is also responsible for the regulation of muscle tone.  Again, if you expect to feel instantly calm when eating your first Gaba Baba bar, you will be disappointed-- as it says on the package: "Benefits are cumulative with regular use."  Other botanical ingredients are listed below. 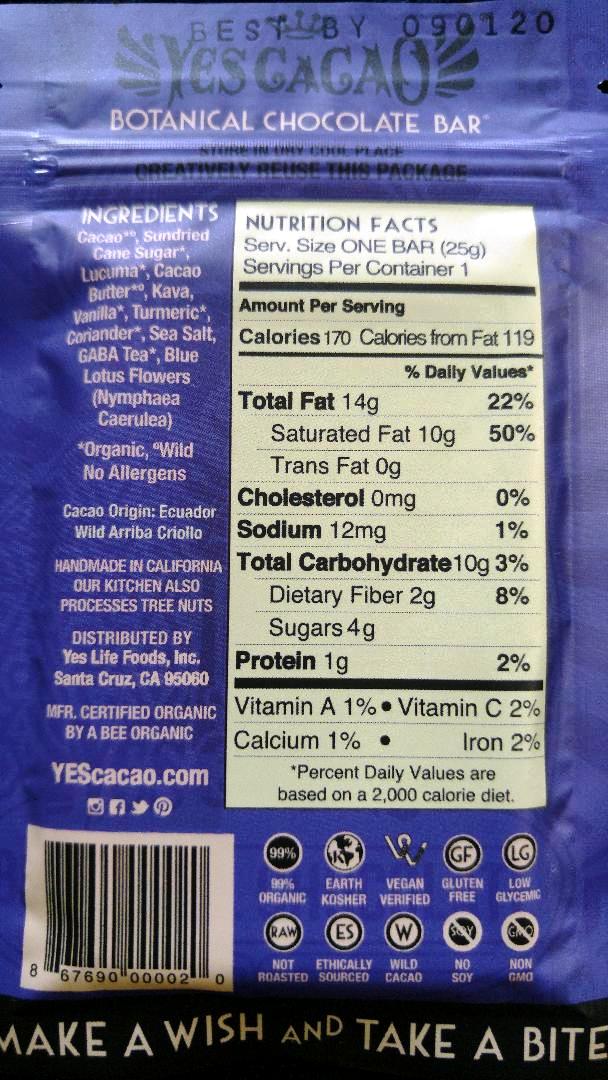 Like the last bar, "Dirty", the cacao-cacao butter mixture was silky smooth in the "Gaba Baba" bar with lovely mouth-appeal and a nice dark chocolate-y taste.  Again, because it is cacao, there was no bitter after-taste like you often find in chocolate that is made from cocoa powder--which has undergone varied treatments before the process of making the chocolate.

It seemed to me that the Gaba Baba bar had less of a pronounced flavour than did the 'Dirty Bar' in which I picked up both hints of Peppermint essential oil and Tusli ("Holy Basil")-- I like both flavour combinations equally.

Both of these bars were delicious and satisfied my desire for chocolate, but after a couple of small tabs, I did not feel compelled to gobble down the whole bar as I often do with other chocolate bars.  I just felt satisfied and content to put them back in their little zip-lock package until the next time I felt the need for a hit.

Each three piece segment of the bar spells Y-E-S which I guess you could say is positively affirmative of this bar? 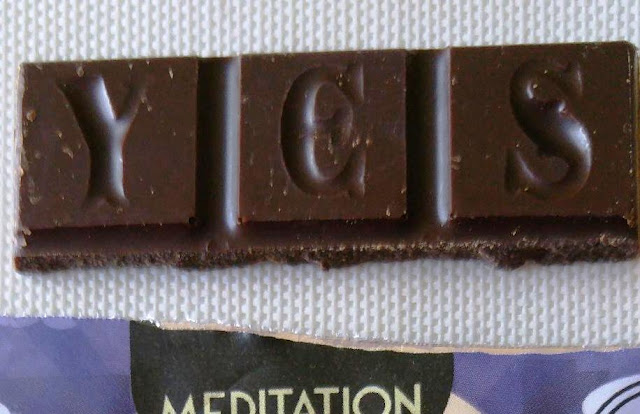 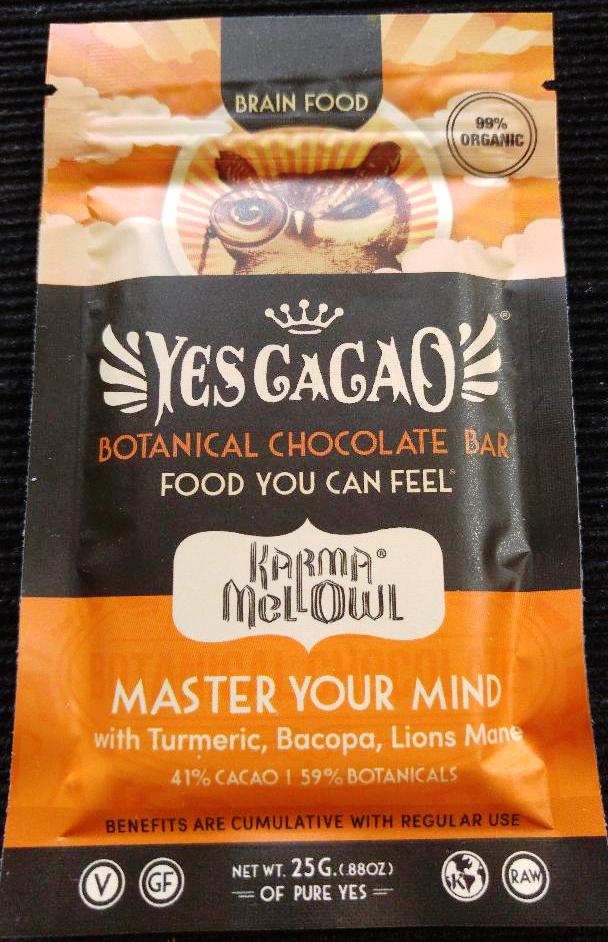 As you can see from the package, only 41% of Karma MellOwl is composed of Cacao, considerably less than the other two bars.  This bar has slightly more sugar content (6%), and a whacking 12 g of Fat (4 g more than the Dirty Bar has).  Besides regular sun-dried cane sugar it contains organic Lucuma in second-listing position, an indication that they have used quite a bit of lucuma.

Lucuma is a fruit grown in the Andes and often used to sweeten ice cream and other foods.  It is said to taste similar to Maple Syrup or Butterscotch.  The pulp contains a full range of sugars: glucose, fructose, sucrose, inositol, as well as citric acid.  The sweet butterscotchy flavour of the Karma MellOwl bar is likely because of the amount of Lucuma used with a boost in cacao butter and a cut back in the proportion of actual cacao.
One other interesting botanical in this bar is the Lion's Mane Mushroom.  The Lion's Mane showed up in our local health food store this past couple of months, so I know that they grow around here.  This fungus grows on hardwood trees and contains compounds that are supposed to be significant for the brain.  They don't look like other mushrooms you might see in the bins at your grocery store: 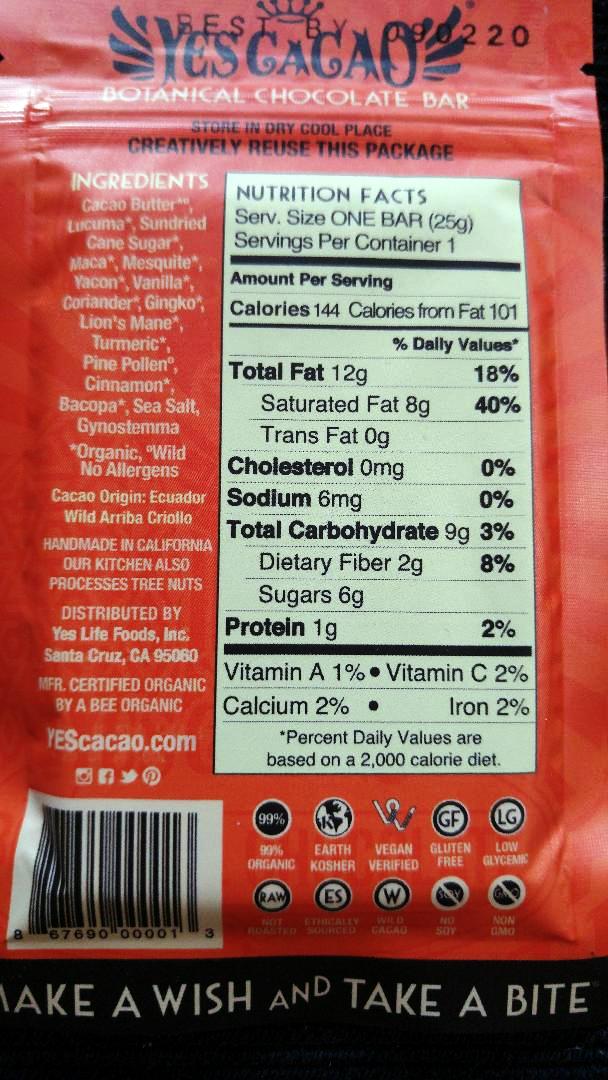 While I am extremely grateful to have had the opportunity to sample all three of these  handmade botanical-cacao bars, I have to say that if I were given only one, I would choose the Karma MellOwl.  I love the sweet, butterscotch/caramel notes and I probably have most need for the botanicals related to the brain that are in this bar (being 68 and now hyper-aware of how brains can slam downhill into dementia if we don't take care of stimulating them).  But mostly I would choose this bar because it is so gosh-darn delicious!!

I encourage you to go and take a look at the YES Cacao website and find out more about the 'superfood' botanicals that are in these bars and other features that I only glazed over here.