Review of "The Return of A Shadow" by Kunio Yamagishi 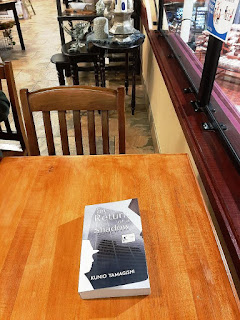 It seems to me that Kunio Yamagishi may have decided upon a particularly deep emotional challenge for himself as a writer of historical fiction. What if instead of writing about a lonely man who undergoes extreme emotional deprivation and finds true love and/or personal happiness in spite of that deprivation I write about a person who-- like many humans we hear about-- only experiences blurry glimpses of personal happiness through the course of his life. Would those dim hopes be enough to sustain him into natural death in old age? What are the choices in life when all your dreams evaporate?
Yes, The Return of A Shadow is possibly the saddest book I have read, or at least in a long time. But beautiful writing, and a likeable protagonist kept me interested and hopeful in the outcome. I believe that older adults, perhaps the age of the protagonist himself, would be most apt to read this book. Why? Because as individuals who have experienced disappointments that we are too old to deny (and which most of us come to terms with) it is refreshing to read about how someone with no strong blood bonds and only peripheral social connections still manages to go about living. While most of us (I don't have any stats but it is likely) have some family connections to which we prescribe "belonging" and perhaps love, there are certainly times when we feel alone and invisible in the world of younger and more powerful people, our own kin included. Are there ways to find meaning, to feel motivated to keep going forward, when we are overwhelmed by feelings of rejection and disenfranchment?
On a meta-level, I am quite certain that this book recognizably addresses the experiences of Japanese internees and their families in Canada and the United States. When I did a very brief discussion of the book on Facebook, one of my friends dismissed the labeling of the internment centres as "concentration camps,"* a rather jolting term that Yamagishi uses. She assured me that the internees "had homes" and that maybe they had to leave their belongings behind, but that that was what happened during war, implying that the Japanese (and some born in Canada) had to take their lumps like all "foreigners" did. Would she recognize the institutional racism that gives rise to such statements? Possibly reading the book would give her a different perspective.
The historical research is impressive, and I feel that I learned a lot from this piece of work.
* "internment centre for political prisoners of national or minority groups who are confined for reasons of state security, exploitation, or punishment, usually by executive decree or military order." concentration camp | Facts, History, & Definition | Britannica