Of course, Easter is a Christian holiday that purports to use the egg as a symbol of Jesus having risen from the dead. The egg was before Christianity, a symbol of Spring fecundity and the return of the sun. It seems rather obvious that the egg has pagan origins and was co-opted by Christians. But how ever this might be, the egg at Easter is a significant part of many traditions and meals at Easter. 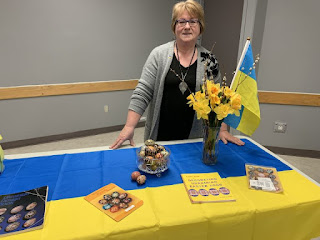 Celebrating Ukrainian culture Ginger Kulas spoke to a full house at the Minden Community Centre on April 5. Kulas, who is married to Ukrainian-Canadian Bill Kulas, spoke on Ukrainian culture and gave a Ukrainian Easter egg demonstration. Find more at Pysanky for Easter

The beautiful pysanky, or painted eggs that the Ukrainian diaspora brought into our lives, is an example of how the egg has made its way into Christian symbolism. Priests in the Eastern rites of the Orthodox Church have a service for blessing the pysanky after the regular Easter Church service. Blood red dyes were originally used on pysanky to symbolize the blood that Christ sacrificed when he died on the cross. The best natural red dye was obtained from the Polish carmine scale insect, porphyrophora polanica, and produced in Ukraine as chervets. These traditional insect-derived dyes are not ethically attractive to people who lead a vegan lifestyle and do not look to ‘animal’ resources to meet their physical needs and aesthetic preferences. And, of course actual eggs are not something most vegans would want to use as art piece. Fortunately, there are a wealth of ‘vegan’ dyes on today’s market and quite a wealth of ideas for honouring the egg as a symbol of rebirth and/or rising, fertility, etc.

Of course, one can buy a pile of candy eggs of all varieties. The chocolate egg is a favourite. Vegans will likely eschew the cheaper chocolate eggs as having associations with child labour in countries, like Cote d’Ivoire. And chocolate eggs with fillings may have eggs in the custard. When buying chocolate eggs, look for vegan eggs that are made with Fair Trade chocolate. You will find a list of suppliers of eco-chocolate Easter eggs at Vegan and Fairtrade Easter Eggs - How Ethical Is Your Easter? (ecoandbeyond.co)

Here are some excellent chocolate eggs that you can make yourself without worrying about what you are eating: 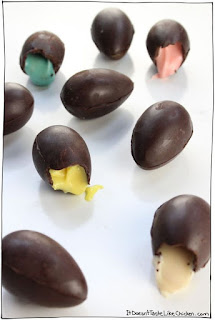 In 1885 in the Empire of Russia, the first annual Faberge egg was “hatched” (made) by a jewelry designer in St. Petersburg, Russia, and presented to Tsar Alexander III at Easter 1885.  The detailing in the eggs is considered fine art among connoisseurs. The Tsar gave both his wife and his mother eggs. They were such a hit with the women that Fabergé was commissioned to supply the royal family with an egg of new design yearly. You can learn more about the most expensive and popular of the eggs below in the video:

Also interesting from the viewpoint of current events (I.e., the Russian aggressions and war on Ukraine) is that the largest investor in Fabergé eggs is the Russian oligarch Victor Vekselberg. This incredibly wealthy man purchased several of the eggs, paying about $100 millions for the package.  Vekselberg was sanctioned in 2017 by the Donald Trump administration, and again in March 2022 by the Biden administration.

In spite of the ‘fine art’ status of the Faberge eggs, it is unlikely that the integrity of truly ethical vegans would be served by being part of the Faberge tangle of wealth and political intrigue.

From a couple of sources online, it appears that the gooey, sweet almond treat called marzipan (from the Latin martias panas meaning “sweet pastry of March”) came into being during a bit of a famine in Italy when ground almonds were used bread-making to bulk up the flour shortages. People apparently approved of the innovation and the sweet almonds were applied to other baking and food –making.  This is my German husband's fave candy type-- and with chocolate, he's in Heaven!

Here is a simple vegan recipe for making marzipan (there are several versions online, but this is easy and quick):

2 tablespoons light corn syrup (or honey if not vegan)

Stir together the almond flour and icing sugar in one bowl until well-mixed and smooth. Stir in the corn syrup, and then add water and almond extract. Cream until all lumps are gone. Place in the freezer overnight. Form teaspoons full of the ‘dough’ into egg shapes. Let it set further in fridge and then enrobe with melted chocolate, white or dark (melted chips).

I also suggest that the following recipes can be used to make delicious healthier sweet Easter eggs: 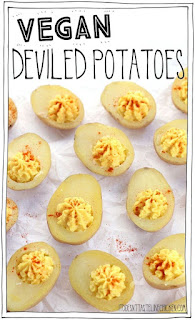 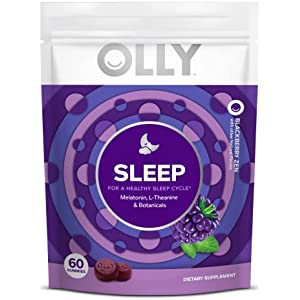 Save on OLLY Gummies

January 18, 2019
ChickPea Nuggets (recipe #1 Below) Chicken Nuggets were a huge treat back in the day when they first emerged amt the famous fast food joint.  They seem to have continued as a favourite snack, especially for children.  So, how nice for all of us that there is a kinder, healthier, and, I think, tastier vegan/vegetarian alternative. If you go to Pinterest, you will find that there are MANY veggie versions of chick'n nuggets, with main ingredients ranging from chick peas to jackfruit to pumpkin to jackfruit and several other versatile plants.  Some people seem intent on replicating the original chicken-like texture and flavour in their nuggets, while many of the other recipe creators simply look for new ways to create a savoury chunk of yumminess with the capability of holding together for a dip. If you have fond memories of the nugget, and/or your child or other loved one has a craving, one of the following recipes will satisfy I am pretty darn sure.  If you are looking for
Post a Comment
Read more

May 23, 2022
This blog post contains links to 25 books-- mostly memoirs-- about religious abuse. And yes, I have read each of them (I am actually finishing one as I write this).  You will find the link to the books below and if you want to read my reviews, click here on my Shelf labeled Religious Abuse  in my Goodreads account. (I think you probably need to get into Goodreads first?).   TRIGGER WARNING: There is a whole load of horrible descriptions and information about various aspects of religious abuse that you may find disturbing and that may trigger you back to your own awful experiences of violence and/or manipulation. Please proceed at your own comfort and safety level. If you have undisclosed experiences that you might like to get help with, please speak to your family doctor or the contacts (for Canada) HERE  or for the USA HERE While each of these books have a major theme of religious abuse , the form of the abuse takes may present in different ways with different protagonists in diff
2 comments
Read more

Check out the SUN OVEN Here.