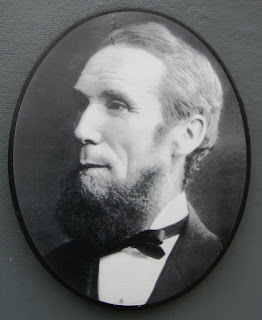 Mackenzie was born in Logierait, Perthshire, Scotland, the third son (1 of 10 sons, of which seven  survived their infancies) of Alexander Mackenzie Sr. and Mary Stewart (Fleming) Mackenzie.

He was born in the house that his father built and, amazingly, this house was on the real estate market for about $500,000+ CAD in 2015, but renovated with indoor washrooms and likely not heated with peat.

July 29, 2022
Salad and Tzatziki with Quinoa + Sun-Roasted Soy Curls It is hot and humid again today. The temperature is 30 degrees C. in the morning. Way too hot for us. I am sorry for complaining about the blue skies and sunshine when some of you read my woes about our long Winter and Spring with low temps and lots of rain (even some snow that stayed around). Is there any pleasing me? Well, a real blessing for us is to have this nifty American Sun Oven that harnesses the power of the Sun (immense power on a sunny day) for FREE! (Well, after you've paid for the oven-- you'd have to do the Math for that). Keeps your kitchen cool. Keeps the rest of the house cooler. Good for the environment. Excellent when you are off the grid on a fishing trip or on a research assignment or just like using your backyard for something besides the garden and the selfies with the flowers. And the food cooks just right, there is NO burning-- you might experience a little food dryness when you are getting used to
Post a Comment
Read more

Check out the SUN OVEN Here.