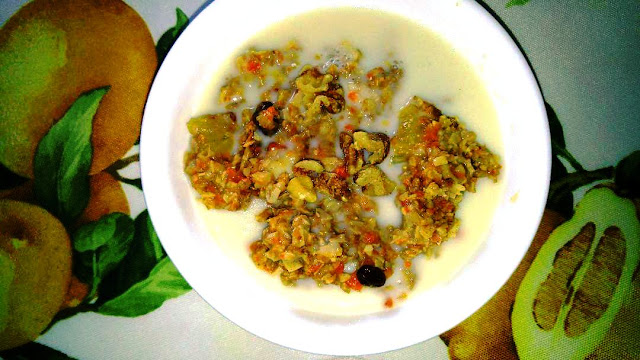 Another sort of gloomy, cool, and foggy morning here on Vancouver Island.  We know that Spring is on the way, but ...
So, it calls for a bowl of porridge-- something that "sticks to your ribs" as my mother used to say (I think she said that, but it may have been someone else).

Here is a plug for healthy organic eating (and cooking)-- food actually TASTES better when it is organically-grown.  That is my observation, and apparently, it's true, according to food scientist Harold McGee (quoted from a blog over at The Kitchn.com): "when plants are under attack, they begin to ramp up production of their chemical defenses. This can mean releasing an aroma that attracts counter-attacking bugs (wasps for caterpillars, for instance), manufacturing something toxic or distasteful to the insects themselves, or producing an anti-fungal compound.
For us, these "defenses" translate directly into flavor and aroma. McGee says, "Because they're not protected by pesticides, organic plants that suffer from insect attack can accumulate higher level of flavor chemicals and other protective molecules, including antioxidants."

So, there's another reason to eat organic-- the taste and the gorgeous aroma!  So, here are the ingredients for your carrot cake porridge... make them whole and organic as much as possible and you will benefit from those choices:

Place all the ingredients (minus last three listed above) in a pot. Bring the porridge to a boil, cover, turn to low, and cook until water is absorbed (about 7-15 minutes).

Transfer your carrot cake oatmeal porridge to a bowl, add nuts, sweetener, and mylk, and mmmmmmm... is it not sinful for porridge to taste like cake?
AND NOW..... WHY NOT TRY THIS DELECTABLE BAKED CARROT PORRIDGE?
REALLT TASTES LIKE CARROT CAKE BUT MUCH HEALTHIER! 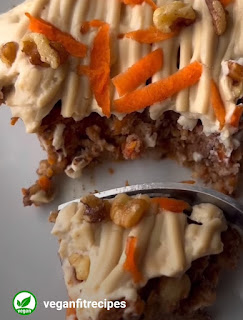