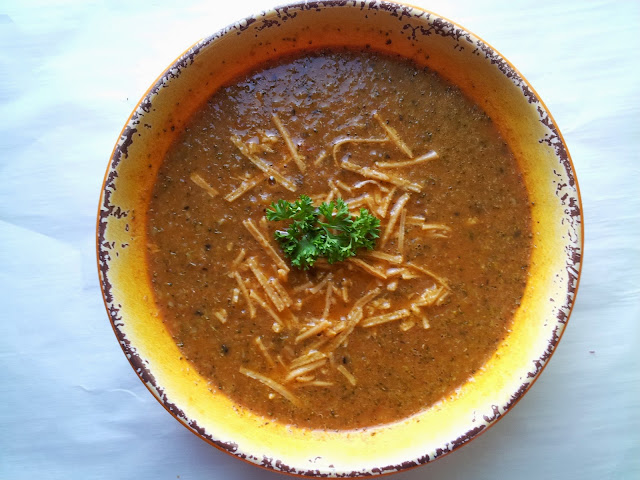 I know that this sounds a little mystifying-- after all, doesn't 'zupa' mean 'soup'?
Why, yes zupa does mean soup (and also something like a drunk's sop, but we'll overlook that definition).

Okay.
Zupa Soup sounds so much better than "Yesterday's Lazy Cabbage Rolls* combined with all the malingering week's veggies chopped up and made into a soup".

But that is basically what you have here.  I made up this pretty delicious Lazy Cabbage Rolls (vegan) but I wasn't that keen on the fact that the rice didn't quite cook through (although that didn't bother my dh-- he had a couple of servings).  So, today I combined about 1 C. of fried Mushrooms, 1 fried chopped Onion, 3 yellow Peppers (which I had roasted and skinned), and about 2# of Broccoli florets in with the left-over Lazy Cabbage Rolls (and various spices, more dill and salt and pepper, basically) and 1 Simply Organic jar of Pasta Sauce, and about 2 quarts of Water, and voila, Veggie Zupa Soup!

I cooked it all to a bowl and then let it simmer away (in a big pasta pot so as to not worry about boil-over) until the rice was finally the way I like it and the broccoli was rendered to a pulp one would never eat if it were broccoli cooked by itself.

This is just a sample of what YOU do, or could do, if you have lots of orphan vegetables in your fridge and yesterday's casserole-- this Zupa Soup turned out pretty yummy.  I wish the same to you!

*I'm feeling a little too lazy to give you the recipe for the Lazy Cabbage Rolls... just check out Pinterest or google-- there are 100s of versions.

**A reader wanted me to pass along this Health & Safety ALERT: In the Hippy Days of Haight-Ashbury fame (San Francisco, 60s-70s), many people were poisoned through eating something called "Diggers' Stew"-- basically an ongoing concoction of leftovers added to an original dish over a long period of time.  My rule is that leftovers are only ever used ONCE.  My leftovers are refrigerated after use  and used within a day or so of their original use.  And if I don't feel okay by the leftovers, I use the little adage from our church's FoodSafe instructor: "WHEN IN DOUBT, THROW IT OUT".  (Thanks June!)