A Sunday Outing to the Cumberland Farmer's Market and a Seaside Edible Walk,

July 17, 2016
It could have been another day lounging around with the tablet on Facebook... but, twigged by something someone said (or inferred) about how lazy I am, I suggested to dear hubby that we might check out the new-ish Cumberland Farmer's Market.  It is open from 11am on Sundays throughout the summer.  Off we went.

These gorgeous hydrangeas greeted us at the entrance to Village Square Park where the Cumberland Farmers' Market is located. 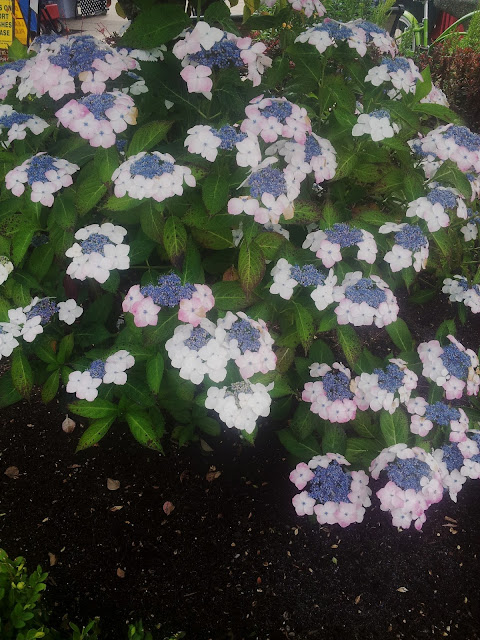 I personally have never seen this sort of hydrangea before.  Have you?  It was gorgeous...

This is really a pretty little Farmers' Market-- it's new-ish (just opened this year) so really doesn't seem to have caught on yet.  The bonus is that it is a little less cheek-to-jowl with people and vendors, for those who prefer a bit of a stroll and a chat vs. a push and a shove and jostle for the coin.  The Market operates 11AM-2PM every Sunday until September.  It is located on Dunsmuir, in The Village Square Park, right next to the Wandering Moose Cafe (a re-purposed old Bank building).

There were many young parents with their little kiddies, dancing wildly to the music of the Celtic Cargo Cult (2 musicians playing a variety of Celtic tunes).  It was fun to see that the kids, in small town tradition, shared out the blueberries and pies that their mommies laid out on the grass for them.
What would a farmer's market be without a fun little band playing while you do your shopping?  Here is a youtube with a slightly re-constituted Celtic Cargo Cult at the Courtenay Farmers' Market 6 years ago. 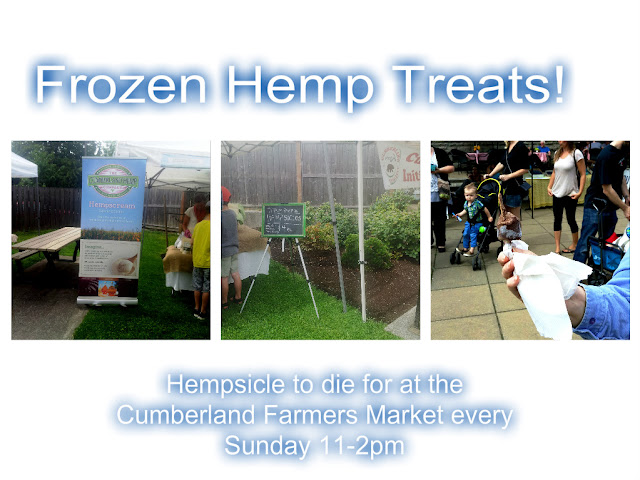 I guess that you can tell that the hempsicle was the highlight of the Market for me.  It was an absolutely delicious organic hemp-based chocolate, chocolate-covered non-dairy confection.  It was $4 (pricey) but worth the leap-- and really, only the cost of a frapiccino, etc., so not a biggie I suppose.  Dear hubby and I shared it.  It was made in a commercial kitchen in Cumberland. I recommend it.

Parking is kind of haphazard, but we did get to park next to an espalier apple tree (or trees?) that I really admired.  It leans over the front fence of someone's home yard.  The apples look very inviting, don't you think?  I took a picture because I am trying to convince my dear hubby of the benefits of doing some espalier planting of fruit and/or berries.  He is a hardsell... but we'll see.

And then we careened off down to our favourite sea-side walk along Marine Drive in Royston.  It has become sort of an "Edible Walk"... meaning that you can eat from the fruit and berry trees that grow along the ocean.  The blackberries are everywhere this time of year, wild and aggressively invasive, but there isn't a huge cry to get rid of them, like there is for the Scotch Broom, for example.

I met a sweet mom and son team picking blackberries for the "old people, who like the memories they bring back when they eat them" explained Irene, 86.  She declined having her picture taken but referred me to her son, John, about my age (in his 60s) who had already filled up a pail with these black-purple gems.  John is a horologist, a technician trained to repair old clocks.  He has a bad back, so when he picks berries he says that he tells himself: "well, at least you have a pail of berries to compensate for the pain".
Irene came to the Comox Valley from Nova Scotia... her father was from County Cork (I could detect some Irish in her speech), or, as her mother had it, from County Cork-in-the-Bottle.  Yes, she was one of those young children of party men in the past who would ask for "Baby" (Irene) to be wakened at whatever hour he arrived home ("three sheets to the wind" is her description) so that she could dance (jig) with him.

John, Irene's son, was born and raised in the Comox Valley.  Last year they picked over a hundred pounds of blackberries, which they give to various elderly friends and acquaintances in their neighbourhood.  A few years ago they donated to the Food Bank but apparently discovered that some of the people who benefitted from the fruits of their labours, so to speak, were hawking the same berries on the corner to get money to "shoot up" with drugs.  They are going for another 100# again this summer.

I told them about the Farmers' Market in Cumberland with its Celtic music and we parted.

Here is a groaning Apple Tree near the beach.  In a while this tree will be picked by various people, some volunteers from Lush Valley Food Action Society, some just doing it as an annual routine for their own purposes.
There are also cherries and plums along the ocean, although they get picked pretty fast by the birds and people-in-the-know, and are not as prolific as the apples and blackberries.  I personally love this abundance of "wild" fruit.  Of course, we also have or share of wild animals that are drawn by the same fruity abundance: birds, raccoons, deer, the odd bear.

So we came home after this fun little excursion and after lunch we did some picking in our own yard, golden plums and cultivated thornless blackberries.  It's a big fruit and berry year this year.  How is your local harvest? (Please comment below-- thanks!)