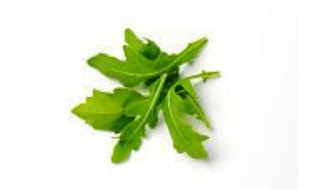 Before I was 55, I perhaps had heard of arugula (I recall once watching a video where it was mentioned by the urban farmers, the Dervaes family) and believe that I had even tasted it (my husband says so, and that "we" didn't like it).

This weedy-looking little green re-emerged in our lives when I enrolled in the 28-day Raw Cleanse over at Penni Shelton's Raw Food Rehab and started faithfully following some of the recipes in Penni's book, Raw Food Cleanse:Restore Health and Lose Weight by Eating Delicious, All-Natural Foods-- Instead of Starving Yourself.

My husband brought home the groceries for the recipes and when I went to make the fake-V8 (oh, so much much much tastier than the real-V8) I popped  the 'handful' of arugula into the vitamix that the recipe called for.

And the first taste was one one those forehead-wrinkling-nostril-flaring-kitty-tonguing (you know, nik,nik,nik licks that kitties make in the cream bowl) attempt to identify the very pleasant, but unname-able flavour in the glass.  And we are old hands at identifying ingredients in blended drinks and such.  We went over the list of what had gone into the recipe-- and, of course, it was the arugula!

Arugula is in the mustard/brassica family (along with broccoli, cabbage, kale, and even canola).  Its scientific name is Eruka sativa and it is commonly known as "rocket".  It appears to originate in the Mediterranean areas and there are records of it growing there back in ancient times.  It is rich in Vitamin C and potassium and also contains: Vitamin A, Vitamin K, Carotenoids, Lutein, Zeaxanthin, Folate, Calcium, Glucosinolates, Sulforapanes, and Chlorphyll.
Arugula is a healthy little green to introduce into your life.


It certainly has a more robust, woodsy-nutty, peppery flavour than most greens (except, perhaps, for canola leaves, which are much enjoyed as a steamed green by some of my African friends).  In Slovenia, arugula is added to cheese and in Italy it is frequently added to a pizza topping, just as the baking time ends (so as not to wilt).

Arugula really has added a lovely new flavour variety to our raw food repetoire.  I plan to grow some this summer (in my square foot gardening box--yay!).  In the meantime, here is that lovely recipe for fake-V8 juice that I have adapted from Penni's book:

Wash well and put the following into your Vitamix (or other heavy duty blender) carafe:
Whirl up and enjoy!  You will feel such a lovely warm feeling when you eat this as a raw soup, or drink it (you may want to add a little water to make it more drinkable).  The original recipe is juiced, and you could well do that, also adding in raw hot pepper if you wish.
To your living health!