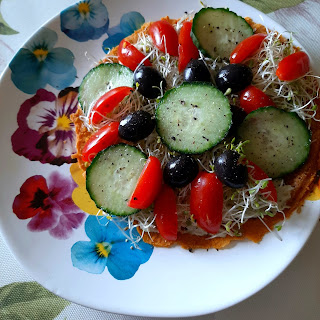 I was chafing at the  at the bit to make this raw vegan pizza as we drove home from a Camp Meeting on a Sunday night several years ago.  At this time in my life I had been making up a variety of raw/living ‘recipes,'any based on my previous non-raw favorite recipes.
At Camp there had been salads and raw fruit and veggies with most meals, but that was pretty much it for “raw” and the salads were cafeteria salads… there probably wasn’t anything organic or the sort of fresh that I grew for the two of us out of our small garden plot. The following recipe is a fabulous Pizza recipe that can be found in Paul Nison’s book Health According To The Scriptures

. It is actually the size of a cooked pizza that my husband and I used to demolish in one sitting, no problem, but the one here is so hearty, so full of flavour and textural variety and fiber, that it truly does feed up to eight people who are committed to getting lots of nutrition from smaller quantities.

RAVE FOR THE CRUST: If you juice carrots, have you ever felt just a tad guilty for composting a pile of the beautiful orange fiber that separates itself from the juice? Well, here is a way to cash in on that fiber that is truly delicious and healthy– Put the following in a Vita-Mix container together:

Add the Vita-Mix lid and poke the plunger through. Begin on Low Variable Speed and process at about #4 until the sunflower seeds are pretty much smooth (a few crunchy ones added nice variety) and the whole mixture resembles orange dough. Amazingly, it has the consistency of regular pizza dough.

Spread it out in a large circle on your dehydrator sheet and dehydrate overnight (105 to 110 F. degrees). I then removed the sheet and flipped mine over on the mesh in the tray for another couple of hours.


About 2 hours before you put the Pizza together:

Remove the stem and wash a Portabella Mushroom cap. Cut it into strips and squares and marinate in Nama Shoyu (raw soy sauce) or Raw Tamari sauce. (I put a clean mason jar with the Tamari sauce bottle inside it right on the uncut mushroom cap after I poured the sauce on to maintain pressure and to prevent it from ‘floating’ on the marinade. Not at all necessary– just one of my fussy little additions to the recipe).
Whirl up the following delectable Pine Nut Dipping Sauce in your Vita-Mix:

Put this Sauce aside. Try not to eat too much during preparation (it’s divine).

When the Pizza Crust is ready, spread the Pine Nut Dip evenly over the crust. Now go ahead and dress this baby. I diverged a little from Paul’s recipe and omitted chopped garlic and minced nuts in favour and arranged three big handfuls of fresh Alfalfa Sprouts over the Pine Nut Dip, and followed that with: 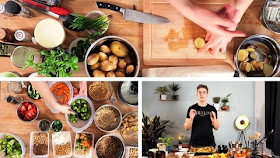 HOW TO SPEND LESS TIME COOKING, SAVE $, AND HAVE THE BODY OF YOUR DREAMS
Paul suggested marinating chopped yellow squash and zucchini in the juice of 2 lemons (up to 6 hours). This sounds yummy as well. You can pretty much dress the Pizza as you desire but the lovely flavours and textures of the carrot-sunflower seed crust, the Pine Nut dip, and the marinated mushroom were really offset by the more subtle freshness of the cucumber, tomato and alfalfa sprouts for us.

And we only ate a half of this Pizza so that Ed was able to take a couple of generous-sized slices with him on a hike up Mount Washington the next morning!

To your living health!
My old boxy dehydrator can also used as a place to raise bread (and pizza) dough!