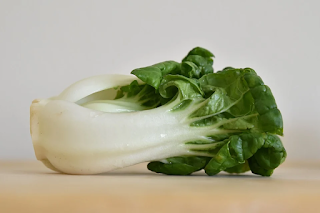 Baby Bok Choy
I love bok choy.  During the beginning of the COVID19 period of isolation there was an amazing amount of organic bok choy available in our local grocery and whole food stores.
Bok choy comes from the cabbage/crucifer/mustard/brassica family, and is a Chinese Cabbage (grown first in Asia), as you might be able to tell from the name.  I guess we mostly see the Cantonese version here-- the Shanghai Bok Choy is a darker green-- the one I think of has broad light green/white stems and lighter green leaves, as in the picture above.  I particularly like the dwarf versions of bok choy, called Baby Bok Choy.  Light, easy to slice and eat, and mild-tasting with lots of delicious leaves.
On Instagram I ran across an account that showed several small chunks of the bases of a bok choy plant sitting in water. When I inquired if they were rooting it to plant, they told me that that don't really wait for roots to form, but that they grow leaves from the old "wound" and after 6-9 days they just pop them into soil and they grow up edible there.
That was worth a try!  So here is what I did and found out:
I copied the folks on IG and just cut those little suckers 2 inches from the end and stuck them in water until they had developed fairly good leaf growth (I'm mostly interested in the tender leaves for eating). 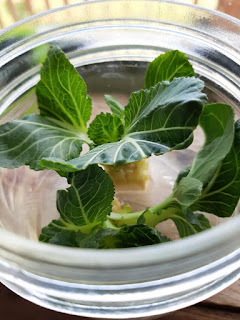 "rooting" the bok choy in water
When the plant had developed a pretty impressive set of new leaves I planted them in my backyard planter (filled with decayed seaweed and sea debris that my husband harvested from a nearby beach, and then topped with a luxurious 18 inches of our compost (kitchen scraps, organic soil, rotted brown matter like leaves).  The grow-box is a former wood box that we removed from beside our fireplace.  It's perfect.  I hardly have to bend at all to 'garden' there.  So far this wonderfully, spongy humus contains the bok choy, some celery that I have started in the same way, and some collard seedlings.  I have glass jars over the smaller plant-lings because something likes to snack on them. 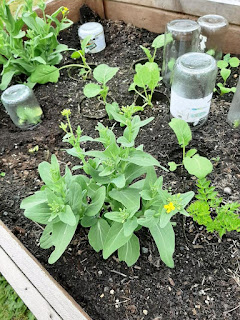 Now, as you can see, they are not "true" to the bok choy image at the top of the page.  But they are covered with tender leaves, big and small, and even have some edible flowers for the mix!  I cut the plant off near soil level and let the roots stay in there to decay (we will see) to offer further organic matter to feed new plants (or the little wood bugs that are so anxiously awaiting each new delivery). 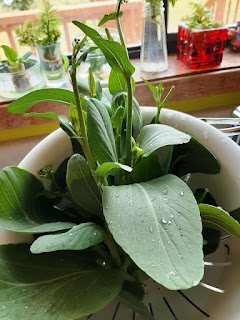 Not bad for a plant grown from the 2" heel of a store-bought bok choy, eh?   I keep putting the heels in water and expect to have one or two of these every week or so throughout the summer.  This is the company today's bok choy kept: 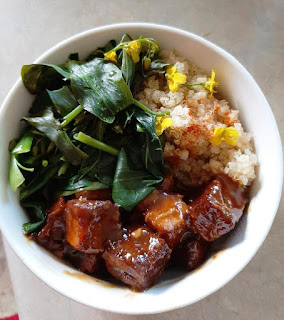 I am happy to report that they taste tender, succulent and mild, just like the original bok choy, even if they do not look like grandpa exactly.  The cubes are a recipe called General Tso Tofu from Michelle Blackwood's Healthier Choices site (vegan and gluten-free recipes).  I steamed the bok choy.  The flowers are cutely edible.
Have you ever planted bok choy like this?  Do you think you might give it a try?